Jackie Craven has continued with this open mic, formerly in Schenectady, now on cyberspace via Zoom, & continues to get the hardcore of Schenectady poets, plus.

I was first up on the list with mostly new poems, starting with what one sometimes hears these days at open mics “Content Advisory,” then one about a dead parakeet “To Berlioz,” & a descriptive piece  “The Altar.”

Bob Sharkey’s poem “Imaginary Companion” was about picturing himself with his granddaughters when he is in his 80s, then read what he found in an a history textbook from the 1950s about “good masters,” why we didn’t know how bad Robert E. Lee actually was.

Susan Jewell read her June entry to the ongoing Rattle Magazine ekphrastic contest on an abstract landscape, then a piece titled “That Summer I became Rose Colored” based on a piece by poet Miller Oberman. 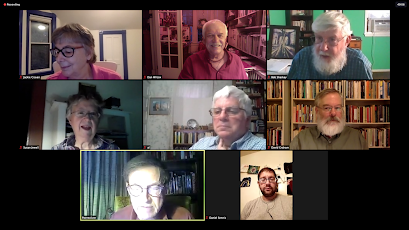 David Graham tuned in with an old memory of his father’s dementia “A Winter Drive With Dad,” then one titled “21st Century Song” about “suits” in cars.

Alan Catlin said he had a couple of Black Lives Matter poems, although not written with that in mind, but the sound was badly broken up; he tried again later with better sound, the first piece about a racist cop ranting at the TV at the bar in Albany when Alan was tending bar, then the other titled “The Fix” about the Amadou Diallo trial in Albany years ago, cops still killing black men.

Scott Morehouse had us laughing again (although we were politely muted) with a piece titled “Howard & the Hermit” set in Idaho where the Anglophone Lord of the Manor wants to hire a “hermit” to live on his property & gets a woman for the job.

Daniel Sennis who has a book of poems available through Northshire Books & other booksellers titled O Conman! My Conman! Sick Rhymes for Sick Times read “On Your Throne of Thesauri” & “Master of Allusion” both full of satiric word-play & rhyme, as is his wont (haven’t gotten my copy of the book yet but I suspect these poems are in it).

Jackie Craven closed out the night with the surrealistic play of an absurdist poem of pure nonsense (as she said) “Someone Should Do Something about the Clock at City Hall” & I agree, I think.

Jackie usually sends out a notice by email which I bounce to the Poetry Motel Foundation Google list & if you are on it you will get it; she also posts on her Facebook group WritersMic, a public group which you can join — 2nd Wednesday of each month, at 7:30PM on a computer near you.