It was a nice mix of the regulars, the occasional & the brand-new among the 15 signed up on the list as we had our 1st gathering in the new year at the Arts Center of the Capital Region. The hosts are Nancy Klepsch & yours-truly, Me.  Inna Erlikh, who did not read today but has in the past translated some of us local poets for publication in Russian journals, provided luscious holiday cookies. 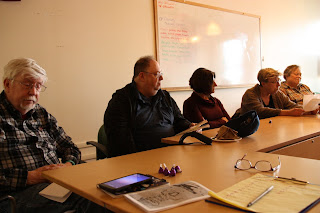 I had waited as folks started to sign-up but soon it became clear that no one wanted the #1 slot, so took it for myself, & read a section titled “The Pre-History” from my work-in-progress “Opening the Mic: a Personal History of the Early Days of the Albany Poetry Scene.” Mary Panza read an intense, moving piece titled “Rain” about a rape counselor’s conversation with a client that opened up memories for the counselor. Jill Hanifan’s poem “Last Minute Christmas” was filled with memories & forgiveness, while “Shape Shifter’s Lover” was a lush sexual fantasy. Bob Sharkey read a poem titled “Rome” about not getting there, with references to the film The Great Beauty & to the Roman poems of Dan Curley, who has gotten there.

Don Levy read a poem by one of his favorite poets, Frank O’Hara, “Why I Am Not a Painter” which is one of my favorite poems. The first of the new voices here today was Megeen Mulholland with 2 poems based on family photographs, “Hey Dad,” & “Top This” in which her father meets Albert Einstein. Kate Gillespie read a found/appropriated poem using the last line from poems from The Snail’s Pace Review, a biannual little magazine of contemporary poetry edited by Ken Denberg & Darby Penney from the 1990s, then another of the same ilk using the next-to-last lines titled “The Beads Are Hot My Daughter Says.” 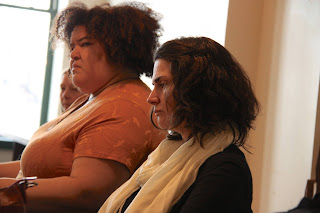 Dan Curley, who was referenced in Bob Sharkey’s poem, read “New Year’s Resolutions” about things he won’t do, then the humorous & loving “My Wife Wearing New Glasses.” Another new voice was Kris Cottom & she read a piece of short fiction “Lost & Found” a portrait of a young girl, a foster child & her doll. My co-host Nancy Klepsch has been writing a series of poems based on impossible requests to Siri (or Alexis) & read us 2 examples “Send Me Sand” & “Send Me Magic.” Jessica Rae was back in town visiting on a semester break & read us a piece of short fiction about a young girl in a bar who is being hit on by an older guy, “Come Listen to My Records” (a brief excerpt can be found in her self-published zine Some Shit I Wrote).

Still another new voice was Tara Kistler who read us a sestina titled “Endurance” with images of sand dunes & colorful skies. Mary Anne Murray said she has been getting back into writing performance poetry & read us the eco-poem “Plastic.” Karen Fabiane graced us with 2 new poems, “More Today” a portrait of an urban gleaner, a woman going through Troy’s trash, & a dialogue about “Her Shoelaces.” The afternoon ended with still another new voice Maggie Brieden who read an excerpt from a longer mystery/thriller story of business intrigue.

2nd Sunday @ 2: Poetry + Prose takes place at the Arts Center in Troy on River St. each month. In the past we had been in the 1st floor black box theater, but of late we have met in one of the studios on the 2nd floor which has the advantage of outside light & a view of the River, which we are growing to like. Ask a the desk & they’ll tell you where to go.
Posted by DWx at 7:55 PM