A wonderful mix of poets for February for the open mic & to hear the featured poet Carrie Czwakiel. But first, I invoked the Muse, the gone local poet Brio Burgess, who left us late last year, by reading her poem “Words Upon Reading of Bob Kaufman’s Death” printed in Open Mic: The Albany Anthology (Hudson Valley Writers Guild, 1994), a nod to Black History month, & I read Kaufman’s marvelous poem “Believe.”

First up was Tom Bonville to read “An American Poem” a funny narrative about a man busking reading poetry at lunch hour outside in Albany. Douglas Holiday wearing a tee-shirt that proclaimed “Black Authors Matter” read a short piece “Spanish Conversation” by E. Ethelbert Miller then a longer poem by one of his favorite writers Etheridge Knight (1931 - 1991) “Feeling Fucked Up.” Joe Krausman was looking for another poem but found instead one he had forgotten about “An Economist Musing on the Commodities Exchange.” This was Randee Renzi’s first time reading here, although she has read other venues, & she read a new piece, a sexy love poem “He Doesn’t Know.” 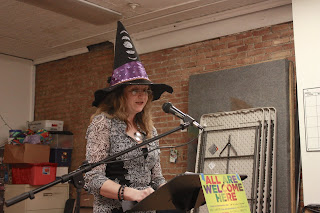 Carrie Czwakiel appeared on the poetry scene a few years ago & reads frequently at open mics in the area. Her poems are characteristically personal, working through trauma & strife towards belief in herself & healing. She began with a couple in that vein, “The Ego” about self-doubt, then one written when she was 12 years old “In a Box.” Then on to a couple more recent pieces from attempts at on-line dating services, an in-your-face “Profile Rant” & another rant about establishing sexual boundaries “Understood.” A similarly strongly expressed poem about a break-up with a friend was titled “No More Chalupas,” while a new, untitled poem featured a more gentle, quiet image of nature where she felt safe. Explaining that she was a preacher’s daughter, she donned a pointy witche's hat, talked about speaking up at a family gathering about her pagan beliefs & read “The Wizard’s Throne Room, 2nd Generation Cult” inspired by a piece of raw emerald & by The Wizard of Oz. She ended with 2 poems of healing, “The Poison” with the image of drawing out the venom of a snake-bite, & a poem that certainly capped her reading, about making beauty from what has been damaged, “Kintsugi the Art of Precious Scars” based on the Japanese technique (金継ぎ, "golden joinery”) of fixing broken pottery using gold — a truly fitting image for her work.

After the break I read my “essay/poem” a response to a request to write about your favorite poem by Bob Kaufman, “Believe, Believe” (see my first paragraph above).

I met the next reader, Mike P., at the bar of The Point, who told me that he writes poetry but never has read it out before so I gave him a Third Thursday flyer, & he showed up tonight to read from his notebook, a roiling piece filled with rhymes & the Devil. Certainly not a stranger to poetry open mics Thérèse Broderick read the poem she has been writing this week, the richly imaged “The Hammock Left Outdoors.” Frank Robinson ended the night also with a recent piece, a Valentines poem on the Arctic howl that blew through, twisting into a hopeful political poem.