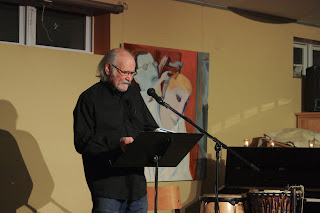 Since moving to Bennington, VT from many years in Chicago, Charlie Rossiter (of 3 Guys from Albany fame) has been, in typical Charlie Rossiter fashion, injecting poetry open mics into the formerly bereft Bennington scene. He is the host of the Poetry/Spoken Word Open Mic at the Tap House in Bennington on the 2nd Tuesday of each month; in the Fall he hosts the 100 Thousand Poets for Change open mic & this event in the “dead o’ Winter” at the Bennington Unitarian Universalist church.  Being “wide-open” we heard poetry, story-telling, trumpet tunes, songs, drumming, a Buddhist text, &, of course, a singer-songwriter with a guitar.

I grabbed the empty #1 slot on the sign-up sheet & began with a piece from 1997 for an issue of Chronicles of Disorder titled “The Track of a Sound of a Day: Today & Over the Years - February 2, 1997” in which I mined my diaries for things done on February 2 over the years, then premiered my annual “Birthday Poem” this one an “un-intentional sonnet.”

Kenn Ash is a regular at the 2nd Tuesday open mic at the Tap Room, began with a love song which he sang & played his pocket trumpet, then one titled “My Worst Drug Was You.” You can also find Laura Ellzby each 2nd Tuesday at the Tap Room; tonight she read poems from workshop prompts, “Comparing Contradictory Thoughts,” “To My Beloved” (a litany of similes), “Window Panes,” & ended by singing a song in Spanish about a wasp in love with a Queen bee. Lynn Mazza read from the anthology Poems To Live By In Troubling Times poems by Marge Piercy, James Wright & Mary Oliver. 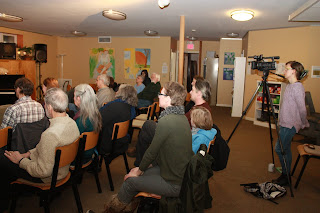 Proving how eclectic the evening turned out to be, Stephen Have set up his conga drums & played his harmonica & drummed. Since we were scheduled for a break, to mix & chat, he consented to be the background music.

After the break, Bruce Lierman told us a story asking us to “imagine a June night in the mid-West” years ago, out with his girlfriend, an embarrassing moment saved by a smile. Jerry Byrd read from the Chen/Zen text Xin Xin Ming, which perhaps could be summed up in the phrase “mind is Buddha.”

Our host, Charlie Rossiter, took a turn to read a new poem “If You See Something,” then one from his Chicago days “Night Life.” True-to-folk-singer-form, Ben Mackin began with a moment or two of tuning his guitar then sang an original tune titled “Empty Promises.”

If you are anywhere within driving distance to Bennington, VT (it is just 1 hour from my house in Albany) check out the events that Charlie Rossiter organizes to bring poetry to Southern Vermont.
Posted by DWx at 12:04 PM