The first third Thursday for the new year here at the Social Justice Center. But the year has started off with the loss of a number of music artists & poets, particularly the deaths of Amiri Baraka & C.D Wright, so tonight I invoked the Muse of Amiri Baraka (once known as Leroi Jones) & read his jazz poem “The Rare Birds.”

First up for the open mic as he often is was Alan Casline to read a poem about one of 2015’s gone poets, Paul Weinman on his softball prowess, “Hall of Famer,” from Alan’s latest collection, Last Man Standing (Lummox Press). Sylvia Barnard read a poem she had read at Don Levy’s open mic about seeing Picasso’s “Guernica” in Spain on a visit there recently with her daughter. Brian Dorn will be the featured poet here next month & tonight read “23 Reasons Why this Poem Doesn’t Rhyme” along with his editorial comments/verbal footnotes. Carole Rossi had come here last month to sit on Sanity Clause’s lap but came back again to read a poem from an ongoing series, “120 Days of Dreaming” & the rhyming poem “Dreaming Day 16: The Captain of Evermore.” 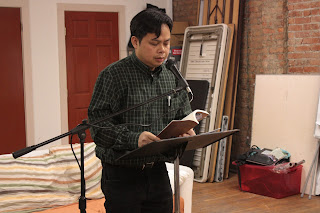 Our featured poet was Bunkong Tuon, whom I’d heard read at a “Community of Writers” Reading in Schenectady & knew immediately I would have to have him read here. In 2015 New York Quarterly Books published his collection Gruel about his experience as a young child as a refugee from Cambodia, & the experience of his family adjusting to life in America. Tonight he read mostly from this book, beginning with “The House of Many Voices,” then to the title poem (which ends the book). On to the poems in between, “First Snow,” then a poem about immigrants & refugees going back to their lifestyle, “Fishing for Trey Platoo.” In between his poems he spoke about dropping out of school & discovering the poetry of Charles Bukowski, about the importance of the humanities in our lives, as he talks about in “How Everything Changed.” The poem “Inheritance” returned to his family’s time in Cambodia & the death of his mother. His book is dedicated to his grandmother Yoeum Preng, who raised him & who died this year; he ended with a new poem not in the book about a walk with her in which they are confronted by racism but find “Still Water.” I had only to hear a few poems by B.K. in Schenectady when I knew he would be a wonderful featured poet here at the Social Justice Center & his reading tonight was moving & a quiet reminder of how what makes America great is the diversity & strength of its people.

After a short break to pass the hat, I followed with a new memoir poem “Joe the Bartender.” Don Levy read his new hilarious & pointed poem “Ammosexuals at the Bird Sanctuary.” It was great that Anthony Bernini was here again tonight to read, with a poem titled “Pause at Day Break” about being up early with nothing going on (or is it?). Karen Fabiane was our last poet for the night with a piece she said she had not read before, a version of an earlier poem, “Brain Storming,” twisting & turning.

Join us each third Thursday here at the Social Justice Center, 33 Central Ave., Albany, NY at 7:30 for a featured reader & an open mic for the rest of us, for a modest (or extravagant) donation.
Posted by DWx at 9:42 AM