i.e., Other People's Poetry (or Prose). I was just getting back to Albany on the train from Philadelphia & made it on time to this event, the guest reader was Daniel Nester reading from the new anthology he as edited, The Incredible Sestina Anthology (Write Bloody Publishing, 2013). Of course, copies were for sale. Host of the event, Victorio Reyes, got us started by reading a sestina not in the book, one by Julio Alvarez that isn't included in the anthology because the author wanted a fee that was too hight & Nester was not willing to pay (out of his own pocket). 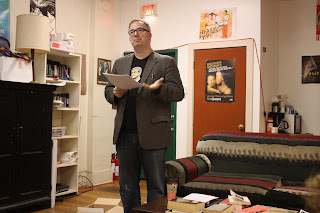 After a brief explanation of the sestina form, Nester read selections from the book, often commenting on the poet or how he discovered the particular poem. The poems he read were Florence Cassen Mayers "All-American Sestina" (in which the repeating words were the first in the line, not the last), "Dear Thrasher" by Sonja Huber, "Not an Affair" by Beth Gylys, "Refining Sestina" by Geoff Bouvier, "Sestina" by Elizabeth Bishop ("A Miracle for Breakfast" is also in the book), "Super Rooster Killer Assault Kit" by Sharon Mesmer, "Faust" by John Ashbery (also with 2), Anne Waldman's "How the Sestina (Yawn) Works," Quincy Troupe's "Sestina for 39 Silent Angels" (because the sestina has 39 lines), "Sestina: Bob" by Jonah Winter, & "Histoire" by Harry Mathews.

The Incredible Sestina Anthology is an extensive collection of the form by a wide range of modern poets, some playful, some serious; the book even includes a couple of sestina's done in comics form.

The schedule of the next series of readings has now yet been announced, but check the local listings of poetry readings in Albany & the Capital District. Plenty more readings & open mics in the meantime.  Support your local Poet.
Posted by DWx at 8:40 PM