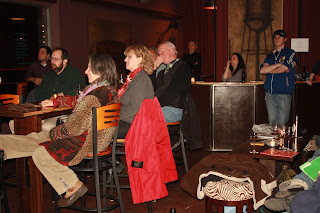 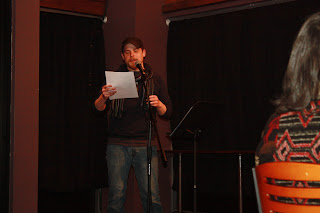 Thom introduced the night with a bar poem, served as MC "sprinkling" his poems during the night & introduced me (age before beauty, or whatever). I had meant to read "Where Were the Professors" as an introduction to the Albany scene but the copy of my chapbook, boundless abodes of Albany, was defective so I did "Joe Krausman" instead, from memory. Then on to some poems from Poeming the Prompt, then "Baghdad/Albany" & ended with "At the End." 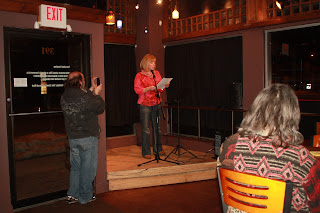 Jill Crammond did a representative sample of her fine suburban-divorced-mom poems (with long titles), beginning with a recent piece about gun violence, "After My Son Returns from His Father's…" then on to the anti-fairy tale "All the Pretty Mothers" & "Cinderella Stops Watching the Pot to Say Grace." "Outside Your Home a Man Lifts Boulders" plays on the idea of what is gentle & is really a love poem. "Barbie Pulls Her Arm Off Realizes She is Not a Real Girl" & "Still Life: Ex-Wife Washes Dishes in a Burning House" played off ideas of divorce & disasters. 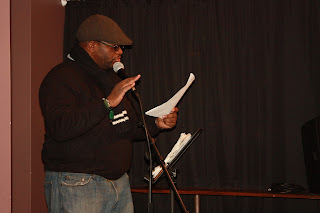 For all his time on stage, Mojavi actually read remarkably few poems, but they are worth all the chatter around them. He began with a tender poem to his newborn son, then on to a series of relationship poems (it ain't only the ladies who writer them, you know). "If He Broke Up With You & Wants You Back" was like an advice letter, while "How Many" brought back memories of early sex & the regrets of the resultant abortions. Another divorce poem was "Please Be My Memory" & he ended as he began with a tender poem, this a love poem.

Speaking of which, Thom read one of his poems that is one of my favorites, "At this Moment." 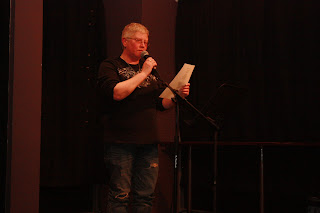 Shannon Shoemaker described herself as "a reluctant Slam poet" & so performed the first Slam poem she wrote, "My Name is Shannon Shoemaker" (she also noted this is the first time she has read not in New York State). She then went on to a piece I call her "dyke on a bike poem" about a confrontation/imagined seduction of suburban Moms. Some of her poems are inspired by the works of other poets, such as her outrageous "dick poem" based on a remark I made to her at a poetry reading, & "Of Hummingbirds & Sunday Supper" inspired by Jill Crammond. She ended with a poem of nostalgic love "A Night in Michigan." 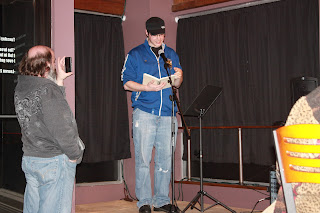 Kevin Peterson is another poet who writes for the page as well as for the stage & began (& ended) with a Slam piece, the opening poem about uncertainty in a gay bar & a meditation on STD's & bad choices. Then on to "No More Smokes" & a piece of sociological observation written at SPAC at a Philadelphia Orchestra performance, & a piece about drinking as a teen & now. The last piece was his funny Slam piece about writing in a bar, "Writing Lyrics." 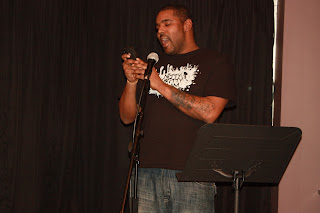 Algorhythm puts his sonorous voice to good use in performing his poetry. Tonight he ranged from a new piece he read from his phone, "Inner Conflict" on the question of "what is I?," a tense, moving monologue in black dialect. Switching to another accent he performed in mix of Japanese & English, my favorite piece of his, an examination of Japanese racism, "Black Man's Cherry Blossom." He ended with yet another consideration of being a "Sucker For Love" (aren't we all?).

We had a great time reading & performing & acting out for the attentive audience at this unique art space called yBar. Check out more information on the scene in Pittsfield at this website.
Posted by DWx at 10:33 AM