My Year of the Awards 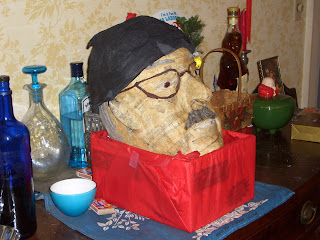 I'm not sure what astrological conjunction brought this about. Perhaps it's just living long enough, but 2011 was the Year of the Award, for me. Actually it started with the December 27, 2010 roast at the Poets Speak Loud at McGeary's, sponsored by AlbanyPoets.com.  A.C. Everson/Breaking My Art's papier maché head from that night is still in a place of honor in my dining room.  I was about 40 when I had my first featured reading, which eventually inspired me to host an open mic (on the third Thursday, now at the Social Justice Center) at which I feature young poets (among others), often for their first featured reading, so I guess I've grown used to "late" honors -- Whatever.

As for readings this year, I was pleased to be asked to be one of the readers at the Scissortail Creative Writing Festival in Ada, Oklahoma in April.  In May, I was privileged to read with other veterans at the Kingston Universalist Congregation, then later in the month, again with fellow veterans, at the Harmony Cafe in Woodstock.  Later in the year I was part of the Puffin Poetry Jam for Peace in Teaneck, NJ with other members of Veterans For Peace.  In between I was featured with Eileen Abrizio, Jean-Yves Solinga & Elizabeth Thomas at the Harriet Beecher Stowe Center in Hartford at Poets Speaking Out for Social Justice.  I also read as part of the Paterson Literary Review launch of issue #39 in November in Paterson, NJ.  In September I had an exhibit of my photos of unknown (& famous) poets at the Arts Center of the Capital Region & a photo in the Photography Center's Member Show.

All that in itself was enough accolades for an aging poet/photographer, but there was also the awards. You know, when they come like this it makes one start to look over one's shoulder for that runaway garbage truck careening down the hill, right at your back.

Early in the year I had submitted poems to the Rip Van Winkle Poetry Award run by All Arts Matter out of Greenville, NY, & won 1st prize. The award was presented in August at the Greenville Public Library.  I've been a supporter of the Solidarity Committee of the Capital District & a subscriber to their newsletter since soon after I arrived back in the area many years ago & I was thrilled to be honored at their annual Labor Day picnic with the "2011 Peace & Poetry Award … in recognition of your work for peace and for bringing poets, poetry and the people together."  Another organization that I've been proud to be a part of, have done readings & reviews for their Tuesday noon events, has been The Friends of the Albany Public Library. On December 3 I was honored by a lunch sponsored by the Friends at the University Club for the Fall Book and Author Event, then a Question & Answer session in the APL's main auditorium.  Later in the month at the Sunday Four Poetry event I received the first Arthur Dare Willis Award for my "... contribution to poets and poetry" presented by the hosts of Sunday Four, Dennis Sullivan, Michael Burke & Edie Abrams.

The point about these last 3 awards were that they were from the community, from people whom I respect greatly for the work they do & so their recognition for my work means all the more, that it is about what we do together, how we keep the community growing. I am humbled & honored to receive these awards & hope that this recognition will keep me working, & growing. We don't work for awards, we do what we do because we feel we have to, but the awards help buoy us up during those times we question if what we do is "worth it" -- it's always "worth it" just because we do it.  Thank you to all those involved in these community organizations.

I guess with all this behind me I can now continue on undistracted with the work that needs to be done: ending the war(s), working for economic justice & freedom, & helping to create the kind of artistic/poetic community that fosters those goals -- as well as having fun, living & loving -- & writing more poems.

Congratulations on all counts!! May many more adventures and awards be in your future, free of careening trucks of any kind. MKJ