At the Arts Center of the Capital Region, co-hosted by Nancy Klepsch & me, Dan Wilcox. This new series seems to have caught on for a number of reasons, including space for prose writers & the fact it is held during the day on Sundays.

The first reader was poet Carolee Sherwood, with 2 poems, one leftover from Halloween (but read today, the day before Valentines Day, because it has a heart in it), "After the Thing in Me Dies We Perform a Made-for-TV Autopsy," & then the more recent "Apiary."  My co-host, Nancy Klepsch, read a poem written today, harkening back to the days when demonstrations were organized by flyers, not social-networking, "Rubylith as a Revolutionary." Kate Laity is one of the prose writers who has been showing ups regularly & had us laughing in a satirical piece, based on arts organizations' fund-raising appeals, where the Friends of Wonderland ask for support. 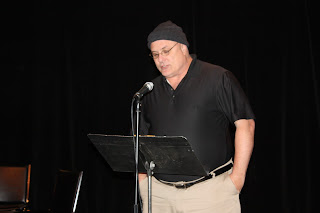 Tim Verhaegan continued the humor with a hilarious "obituary" of Charles Hoyt Verhaegan (his "twin brother's oldest brother"), who "was not expected to live long" but "miraculously pulled through" each time.  Ron Drummond gave us effusive readings of a draft of his "second invocation," this to Shakespeare, & the just written "Prayer About Water." Jill Hanifan's moving "Sister Stills Her Impulse" was new, from the writing workshop she is in, then "The Flower Bed" with the images of geraniums as sex & love.

Mimi Moriarty, who reads at many poetry open mics, read an excerpt from a short story, about a woman becoming absorbed into the life of birds out her window; I hope to hear more from this interesting tale. Nancy's co-host, me, read 2 older poems, for Valentines' Day, "Said Again" (about recycling your old love poems) & the (un-recycled) "Valentines." Heather Haskins read for the first time last month & liked the experience enough to come back today, to read the touching memoir, "Playing Chess with Jesus." 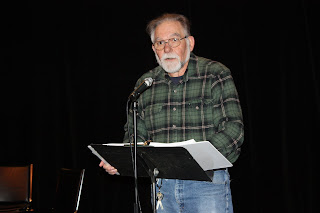 Howard Kogan is also good with humor, made us laugh with his first poem about picking the best from established religions to create his own "New Religion;" he described the poem, "Goodness," as "a frustrated Valentine," then ended with the chilling "No." Bob Sharkey read an excerpt from a longer narrative piece, set in the city of the imagination, Sustenance, with a book high-lighting character, Sonny, & plenty of ocean & lobsters (such as sometimes show up in his poems). Sally Rhoades read an excerpt from a short story about a character getting ready to go out; she said she wouldn't tell me the title & I said I wouldn't ask.

Such is the fun we have on the second Sunday of each month at the Arts Center of the Capital Region, 265 River St., Troy, NY, starting at 2PM. Bring poetic prose or prosaic poetry or any combination thereof, & it's free.
Posted by DWx at 2:54 PM

Poetry of the Day said...