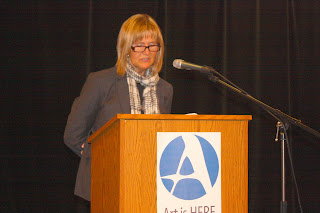 This was the last in a series at the Arts Center of the Capital Region. (See my Blogs for the May 11 & November 16 readings.) I was one of 7 readers this night in the Center's clattering "black box" theater. The curator, Kathryn Allen, introduced the reading but each author come up to read without individual introductions. The theme was "Relationships;" like the term "memoir", that can be just about anything you want it to be.

Emil Jarczynski read his long dance class story, "First Step," in 2 parts, with a couple of poets in between. George Drew read a pleasant mix of his characteristic poems, beginning with "I Don't Know the Taste of Chitlin' Blues," some poems stopping by a couple of graves, a tribute to a friend ("Hey Jack"), & ended with Motown in the Detroit airport. 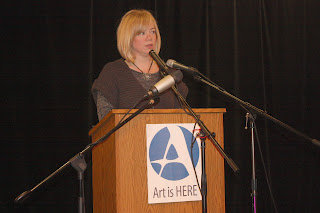 This was my first chance to hear a big chunk of the poetry of Jill Crammond Wickham, who has been coming around to open mics of late. She read a cluster of mostly short poems, starting with contemplating marriage & motherhood in "Girl Meets God;" she included poems to her children, a couple of "June Cleaver" poems, the fun litany of "Who Says a Working Mother Can't Write," & others, often wryly humorous & commenting upon our curious 21st Century concept of the family & the roles of women.

After a break I read a mix of poems to my grandmother ("The Blues"), my parents ("Going Postal"), my father, my kids, ending with "Chasing Tom," all relationships of one kind or another, curiously no love poems. Kathryn Allen read an essay titled "Don't Speak Memory," thus tying it to the theme, that was primarily an anti-intellectual screed against Vladimir Nabokov, particularly against Lolita. Personally, I don't think most child molesters spend much time reading Nabokov.

David Nichols read an amusing memoir of his Irish mother & Scots father & their daily oatmeal. Donna Miller also read a short, tender memoir of her grandmother, prompted by finding a box of her things while in the process of moving.

This has been an interesting series, bringing together novice & experienced writers/readers. But once again the Arts Center has treated writers as poor step-children. For example, there was a nice wine & cheese table, like you find at art openings, put out for the audience & writers -- financed by those of us who read. Most people know I'm not adverse to throwing a party for poets, but when the Arts Center holds itself out as one of the hubs of culture in the area (after all, that's it's name, isn't it?), one would expect more. Do the painters & sculptors whose work is exhibited at the Arts Center have to provide the refreshments for their opening reception?

(I may be wrong on this, but I understand that the Arts Center got grant money for this Memoir Project. If so I wonder what it was spent on; in addition to providing the party, none of those who read got paid.)

But my biggest gripe is the crappy publicity for the writers. If you go to the Arts Center website you will note that the information about the visual arts exhibits includes the names of the artists whose work is in the galleries. But when you read the notice about the Memoir Project readings there is no listings of the readers in each of the events. The "curators'" names are listed, & those of the memoir writing workshop leader, but not the names of the actual writers (i.e., artists). I was notified by the Arts Center back in April that I would be part of this reading, so this is no last-minute event. The writers deserve to have their names listed in the Arts Center publicity just the same as they list the names of the visual artists who are exhibited there. Obviously they -- Arts Center administrators & "curators" -- have not paid any attention to other literary events, readings & open mics in the area & so have no idea that writers are artists too.
Posted by DWx at 4:58 PM

we provided our own refreshments at the june reading, too, and it didn't occur to me to question it. but i think you make some excellent points. thanks for being irritated by it. :)

Dan--you are right on. Poets must demand respect and it's particularly absurd (not to mention unprofessional) when an arts oranization treats them the way you poets were treated. I'm sure they'll enjoy listing this project in their annual report to show how open they are to all the arts. what bullshit.
Charlie

Thanks for some insight on this event.. I believe I submitted work, but I certainly won't make the same mistake again... xoC