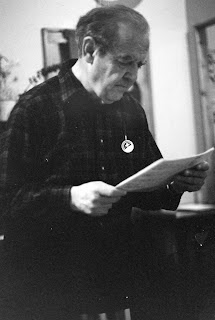 [This is my favorite picture of Harry Staley, taken at the old Half-Moon Cafe in February 1991.]

This was one of those events that came about almost by accident. I received a phone call from Helen Staley wanting to set up a reading for Harry at the Third Thursday Poetry Night the Social Justice Center. I had been to visit them in their State St. apartment & we had talked about my series & the possibility of Harry reading. However, I already had commitments for readings going through November. So instead I arranged for the use of the space at the Social Justice Center on another Thursday evening, June 26, which turned out to be Harry's 84th birthday.

The place was packed, as well it should be, with folks from Harry's years at the University at Albany, as well as activist friends & community poets who know him from his past readings. Interestingly, on display, was a photo, apparently from Tom Nattell's collection, that I had taken for publicity use for the Readings Against the End of the World in 1988, the year it was held at the newly opened Social Justice Center. In the middle, holding the end of the long ribbon of pages listing the readers for the 24-hour event, was Harry Staley (the other end was held from the top of a ladder by Tom Nattell); another person in the picture who was in tonight's audience was Rezsin Adams. Albany documentarian, Joe Schuyler, a student of Harry's from the early days, took pictures of all of us. At one point Ted Adams & Harry compared their ages (Ted is older). But we were here to listen to poetry.

The poet reading with Harry was their friend Ellen Reed Driscoll, who had done the illustrations for Helen's book, The Paw on the Tarmac (Westview Book Publishing, 2007). But tonight was her first reading, despite that she has been writing poetry for a number of years. One advantage of going to open mics is, not to copy other readers, but to find what works & what doesn't in a reading, to introduce a level of reality to one's idea of what a "poetry reading" is, & to try out one's own poems, to find what works & what doesn't. Ellen's topics competently covered the required love, death, & politics, with an occasional wandering into sing-song rhythms & rhymes & poetic diction. Her poems were generally short musings in a relaxed presentation. I hope to see some of these hot-house flowers out in the open air of open mics again.

Harry Staley has been in this community since the 1960s, as a teacher, scholar, mentor, poet, activist member of the community, & since my return here 20 some years ago (so pleased then to find Harry still here) I have tried to get to every poetry reading he gave. Some poems I have heard over & over, before his poems were available in books -- as Ted Adams stated to me tonight, "He has given a new meaning to the word 'Petunia'" (see "The Senile General in the Garden," from his The Lives of a Shell-Shocked Chaplain). Tonight he read from All One Breath: Selected Poems, The Snail's Pace Press, 2002. He read "Early Mission," "Sniper" (with its marvelous sound effects), "Beyond Victory," "First Will and Testament," the anti-war (aren't they all?) "Valor," "The Rat" with its carefully crafted half-rhymes, "Tom Kelly Mimics Robertson Davies," "Construing Aliquis," "Convalescent" (with its line that gives the title to the book), "Cain," and the perfect ending of "Nuncs." In spite of (or becaue of) Harry's characteristically carefully constructed (& short) reading, the audience wanted more, so he performed the exceedingly rare poetic encore, not once, but twice. The first, at Helen's request, "The Final Flight;" then, from the audience a call for "Fourth Commandment." While showing the weight of 84 years, Harry gave a strong & lively reading, tinged with his ad-lib humor & leprechaun smile.

"Thank you Harry," the audience said in its standing ovations, for being here, for all these years & for now. 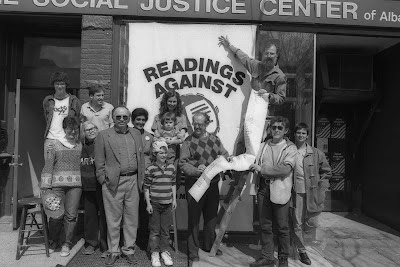 Great reading from Harry! Love seeing the older pics in your blog of poets and albany.

It's always great to hear Harry read. His poetry and the way he reads it is the definition of sublime! Uncle Don