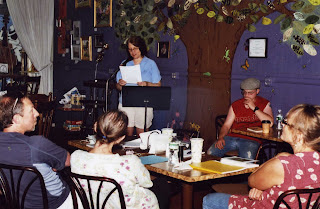 I've been meaning to get to this venue but never got my ass in gear. While at the CT Beat Poetry Festival, I ran into Lori Desrosiers & she handed me her new chapbook, Three Vanities & reminded me of the reading on Monday. Well, I was staying over in CT until Monday anyways & Westfield was on my way back to Abany, & the featured poet was going to be Joan Pavlinsky -- so how could I not? Of course it was the hottest June 9th ever -- so we just didn't wear as much clothes, right?

Lori is the host of this series & she started off the night reading the poem "Wheel" by Suzie Patlove.

I read "Writing Crows," then my just composed tribute to the CT Beat Festival (read it at my MySpace Blog: myspace.com/dwlcx), & the oldy "The Patron" (for any painters in the house).

Local poet R.S. Herrick read a couple on the heat, "Walking on a Warm Night" & "The Haze of the Heat" & a haiku (gotta read them twice, they go by so fast).

Terri Klein, just off the Festival, still full of spunk, did one about girls on swings, "Against Gravity," & "Tag," the spray can type (or was it?).

Victoria Muñoz wrote a poem on the way up here, "Driven," an English/Spanish word list (is writing a poem while driving an offense like talking or texting on your cell phone?). Then a series of kisses: "Even in a Kiss" by John Jeffries & her own 2-part "Kisses in the Night" from her 2007 chapbook, During Your Reading. 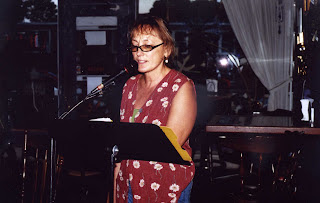 I had first met the featured poet, Joan Pavlinsky, at Tom Nicotera's party back in March & then ran into her again during the Festival. She is one of those poets who paints, plays the flute, sings in a choir, in addition to having a real job helping people; in other words, one of those people who make you tired just listening to her schedule. Oh yeah, she also made an attractive little 4-page fold-over handout of some of her poems to give to each of us (titled These Woods). Her reading was a wonderful salad mix of steamy nights of "Longing" & "Wanting", nature poems of deer & the woods, poems from her work & about the mental health system ("Mental Status Exam"), the wonderfully titled "Too Much Wonderment About Her Fundament," even a love sonnet & one in the style of Dr. Seuss. And a great smile too.

This is a weekly series on Monday nights at Jester's coffee house (great food!) on Elm St. (the main drag) in Westfield, MA. But they are taking the summer off & will be back in September. You can find out about it, & other stuff, at http://www.poetrynewscalendar.com.
Posted by DWx at 12:36 AM