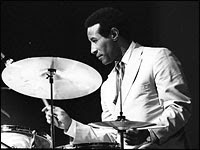 It's not like I didn't notice the death of Max Roach on August 16 -- it was announced on the news that day on the classical music station & that night at the Third Thursday Poetry Night Julie Lomoe talked about meeting him when she was young. My early, now worn, LPs of Charlie Parker (on Baronet Record) with various sidemen all include Max on drums (I just put them on for inspiration, breathing in). It's just that it didn't occur to me to write about him, until I heard the democracy now tribute broadcast yesterday. I was chastened when I realized the similarities between Max & Grace Paley.

On the surface (where so many of our troubles start) they were so different: she white, female, poet; he black, male, drummer. But their similarities are what makes it real: both using their art to confront social issues (e.g., Max's "We Insist - Freedom Now Suite", with Abbey Lincoln), from racism, to nuclear weapons, poverty, world peace. An art engaged with the world. Don't believe me, check out http://www.democracynow.org/article.pl?sid=07/08/27/1425234 (another similarity).
Posted by DWx at 1:47 PM