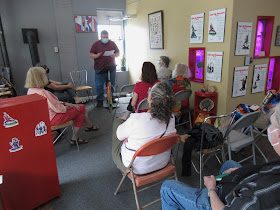 This is another of those open mics whose origins are pre-pandemic & has survived on Zoom, poet Jackie Craven is the host.

With the proximity of the 20th anniversary of the attacks of September 11, 2001, I read my poem noting another September 11 — 1973 & the US-backed coup that toppled the elected government of Chile -- “Another Tuesday, then read “Writing Crows” which had been in the recent art/poetry exhibit, Poetic License, in Kingston, NY.

David Graham said that he has not been finishing poems lately but has been writing everyday; he read “Next Time Time You See Her” about a friend’s death & read at the funeral. 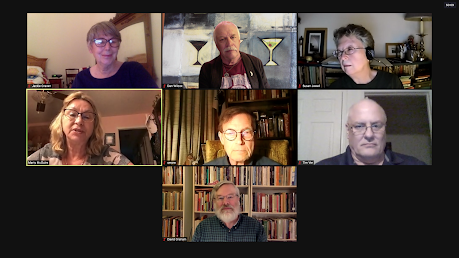 Susan Jewell read her latest rejection by Rattle magazine, “There Will Be Birds” with birds as messengers, then a poem just accepted to an anthology by Ironhorse Press (& a $50 prize), “A Herd by the Side of the Road Listen to Yeats.”

You can always count on Scott Morehouse to inject a healthy bit of humor into an open mic, tonight he read “A Xmas Letter” putting a happy face on a dysfunctional family, with a break up & a new basset hound.

Marty McGuire said this was the 1st time she had done any thing like this, said she was a school counselor but wanted to be a stewardess, her poem “Tears on My Window” about being on a plane,” then the brief “Dust Bunnies.”

Jackie Craven read 2 sci-fi poems from a recently accepted chapbook, both inspired by her memories of her father’s garden, “Frankenstein’s Garden,” the other about his roses.

Tim Verhaegen showed up a little late, read again his tender poem about his Mom, “I Love Her,” & shared his screen with a photo of himself with his Mom, then read “Sex” a memory of his gay sex now that he is growing older.

This Zoom event takes place on the 2nd Wednesday of each month & you can find the Zoom link on the Facebook site Writers Mic.

This was an In-Person Reading at The Poetry Barn, in West Hurley, NY, as part of the Poetic License exhibit at the Arts Society of Kingston. See my previous Blog posted August 7 for a report on the earlier Zoom reading.  This reading, held on the eve of the closing of the exhibit, included a number of poets — & a few of the artists who created visual art based on the poems — in the exhibit this year (& one from last year’s exhibit). I was pleased & honored to be one of the readers as one of of the poets who had inspired a painting in the exhibit. 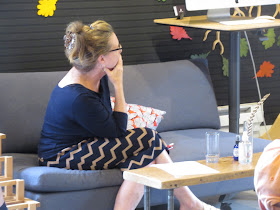 Co-founder/coordinator of Poetic License, Lissa Kiernan, served as host & M/C; Lissa is also the founder of the Poetry Barn. She described the project, pointing out that about 100 poems had been submitted & about 36 were selected to be submitted to the ASK gallery for selection & inspiration by their members, then introduced her co-conspirator in the project, poet Tina Barry, as the first reader who read her moving poem on the death of her mother, “Come Back.” Another poet who read later, Will Nixon, contributed the multi-media art, a photograph & a hospital gown on which he had written lines of poetry, about which he spoke later when other artists commented on their process in responding to the poems.

Will Nixon’s poem “4am Friend” was enhanced by Kristin Reimer’s “Enchanged Managerie.”

Matthew J. Spireng read his poem “Driftwood” to which Marcia Sank contributed one of the few 3-dimensional pieces in the exhibit, “Driftwood Reflections.”

I read my poem “Writing Crows,” & the artist known as SL Rika responded with a painting titled “The Crow Flies” — how often do we (living, breathing) poets find out we inspire a new work of art by another (living, breathing) artist? It’s the first time for me in my many, many odd years, so of course I had to buy the painting, that now looks quite at home on the wall of my dining room. 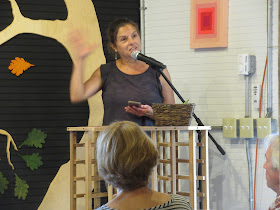 Mary Ann Murray, who had been a student in Albany during the earliest years of the Albany poetry scene & now lives in Athens, NY read her poem “color theory” artist & artist Camille (Cami) Fischer responded appropriately with the colorful “Little New Paltz Village.”

One of last year’s poets was also here, Phyllis Capello, to read her poem “Mythology News.”

Lissa Kiernan read her poem “Keeper of the Robes” which had inspired Renee Zhang to paint “Ephemeral Layers.” Lissa also had art work in the exhibit inspired by the poem “Agnes” by Maureen Alsop.

Some of the artists were also in the room. Sharon Ascher talked about working in paisley designs & her painting which was a response to Laura Whalen’s poem “Elegy for E” (as in Emily Dickinson), & Lissa read Laura’s poem.

Lissa also read Juan Mobili’s poem “Victoria” about which the artist, Victoria Perry, spoke about being drawn to the poem by the coincidence of her name. &, as mentioned above, the poet/artist Will Nixon talked about his visual artistic response to Tina Barry’s poem.

I have always liked having poetry readings in art galleries & this project took that a step further, in addition to turning the more traditional "ekphrastic" poetry on its head, by encouraging visual artists to respond to the written word. I am looking forward to next year's edition of Poetic License as well as perhaps seeing this concept expanded to other venues, other cities. In any event, to the poets & artists: Keep at it!

Update: here is a link to the poets & poems that were read -- https://youtu.be/uvrXBK2t_98 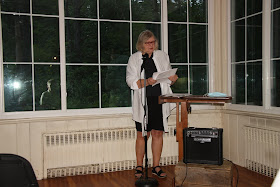 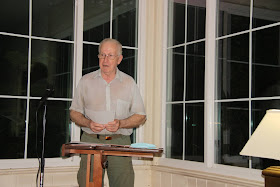 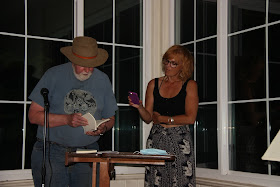