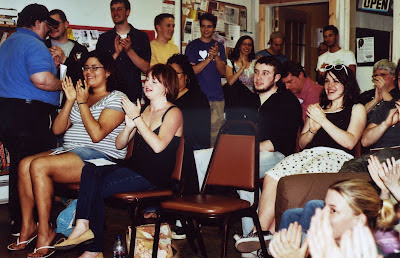 It's Official: once again my series was designated the "Unofficial Start of WordFest" (on the eve of the birthday of Bob Kaufman, our Muse for the night). We had a full card of 17 or so open micers (is that a word?). And the 18 poets who were the feature, "the Shoutin' Rosebuds of St. Rose" (My old sophomore year high school English teacher, Lynn Cronin, would be proud!).

We began with open mic poets (as usual): Alan Catlin, Michael Hare, Gene Damm, a new voice Chris Petterson ("The Mosaic Inn"), Bob Sharkey, & Don Levy ("Why I Blew My Muse" -- just had to get that title in here). Then the old Prof his-self, Daniel Nester read his poem about his first kiss, & continued on to introduce the five group pieces of tonight's featured performance (students from his oral interpretation of literature class at the College of St. Rose). To make my life easier they had prepared a handout (what course is complete without it?) listing the performers, the group name & the title of the poem. So here goes:

Sistas 4 Ewa included Ewa C, Christina T, & Amy W performing "Dancers," a humorous take on performing. Danielle H, Dan H, Kara R & Kristofer W performed as Shit, I Crashed My Land Speeder; their piece was "Inspiration," a commentary on clichés. Group 5 (aka Anti-Bush Bitches) were Ashley B, Ally C, Karley G, & Brigette M did Ashley's political piece, "The Government One," filled with feisty outrage about the economy & the war. "Shout out your imperfections," was the message of "Real Beauty" by Four Easy Payments (Rob C about whom we learned more than we need to know, Lindsey D, Tara F, & Nicole L). The Saint Rose Difference was Jonathan A, Mary Catherine O, & Kali Z who performed an homage to Geeks, "Superman Without the Phone Booth." All the pieces were superbly performed with energy & humor -- they clearly had fun & so did we.

After the break I read "What Passover Has Taught Me." Then Kristen Day was back with "Phobic". Last year Katie Vermilyea was one of the students from Daniel's class who read here in the open mic; she was here again. Tommy LaBello had an interesting piece with a sentence for each year of his life (good thing he's a young guy). Then Tom with his hip-hop on government surveillance.

Mary Panza took down Shel Silverstein's "The Giving Tree" finally. Then the list expanded as poets arrived from a gig at a old folks home where they had done a reading -- The Poet Essence, Thom Francis, Dain Brammage, & up from South Carolina for WordFest, telling us "What Happened to Hip-Hop," Max Parthas.

One of the best Third Thursday readings -- there's nothing like Rosebuds.
Posted by DWx at 10:11 AM